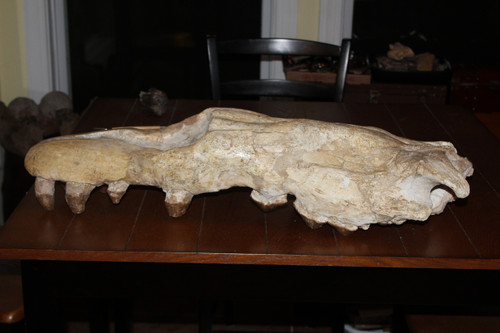 Pappocetus Maiacetus skull similar to but much rarer than Basilosaurus, from Morocco

Shipping: local pick up only, I will drive within a reasonable distance, to meet you part way if needed

Thank you for looking

The genus contains a single species Maiacetus inuus, first described in 2009 on the basis of two specimens, including a specimen which has been interpreted as a pregnant female and its fetus.This represents the first description of a fetal skeleton of an archaeocete. The position of the fetus (head-first) suggests that these whales gave birth on land. Whales generally give birth tail first, while all land mammals give birth head first. That the Maiacetus should give birth on land is not so implausible because this whale is semiaquatic or amphibious. Maiacetus represents the transition of land mammals back to the oceans where these animals were living on the land-sea interface and going back and forth.

However, Hans Thewissen, discoverer of Ambulocetus, has questioned these conclusions, suggesting that the smaller skeleton could be a partially digested meal. Even if the small skeleton is a fetus, Thewissen writes that it may not have been preserved in its normal in-vivo position.  Authors pointed out in the original article, however, that the fetal skull has no tooth marks.